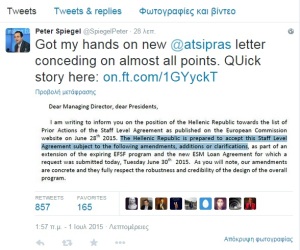 I  am  writing  to  inform you on  the  position  of the  Hellenic  Republic  towards  the  list of  Prior  Actions  of  the  Staff  Level  Agreement  as  published  on  the  European  Commission website  on  June  28th 2015.  The  Hellenic  Republic  is  prepared  to  accept  this  Staff  Level Agreement  subject  to  the following  amendments,  additions  or  clarifications,  as  part  of  an extension  of  the  expiring  EFSF  program  and  the  new  ESM  Loan  Agreement  for  which  a request was submitted today,  Tuesday June 30th 2015.   As you will  note,  our amendments are concrete and they fully respect the robustness and credibility of the design of the overall program.

1. VAT reform:
Maintain the 30% discount on islands, to be applied to the new rates.

Gradually increase the advance  payment of individual business  income tax to 100 percent and phase out the preferential tax treatment for farmers (including the subsidies for excise on diesel oil) by end-2017.

The 2010 reform will be fully implemented but the 2012 reform (sustainability factor) will be postponed until the new legislative reform is implemented in October 2015.
EKAS will be phased-out by end-2019 but without any immediate action on the top 20% of beneficiaries.
All nuisance charges will be phased out by end-2017, starting from October 31, 2015.

The new framework will be legislated in autumn 2015.

ADMIE will be split from the PPC into a separate legal entity under state majority ownership.

Thank you in advance for your support. I look forward to hearing from you.

Cc  :   – Mr. Jeroen Dijsselbloem, Chairperson of the Board of Governors of ESM and President of the Eurogroup
–  Mr. Klaus P. Regling, Managing Director of the ESM